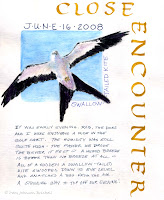 I saw my first Swallow-tailed Kite two summers ago. It was way up in the sky and of course, flying away from me. The tail was unmistakable, though. The S-t Kite's wings are long and slender, making it's job in nature (snatching large insects from the air and small lizards from trees) effortless.
But finally, a close encounter! This bird is amazing to watch. It swoops, banks and dives pretty much without a beat of its wings. The tail however, is quite busy! What a joy to finally get a good look at one. We pulled the golf cart over to watch the show. Even the dogs followed it's flight! I understand that they drink by skimming the surface of the water - I'd love to see that! (click on image for larger view)
I had no idea it was so big. When comparing it's size with other raptors, I discovered it's larger than a Red-tailed hawk by a couple of inches in both length and wingspan! L 22", WS 51", Weight 15 oz. But, the Red-tailed Hawk weighs 2.4 lbs.!
Good thing the R-t Hawk's job is different as it's weight and bulky wings would make for starvation and probably some crashes if it had to swoop, bank and dive in the air to catch it's prey. That's why we see them perched on telephone poles and trees, scanning the ground for meaty critters. Hmmmmmm, meaty critters - definitely why it weighs more than the Swallow-tailed Kite! Not many calories in insects and small lizards :)
I love form and function in nature..... for everything there is a reason.
Posted by Pam Johnson Brickell at 5:00 PM