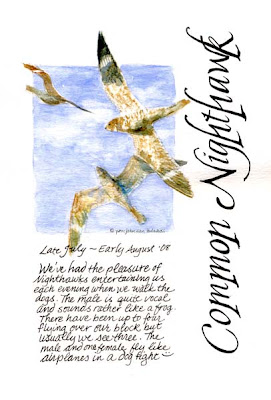 For a few weeks before we left for NY, we had four Nighthawks entertain us during our evening dog walks. Best of all, we didn't have to leave our neighborhood to see them.
The first evening was too dark to make a positive ID, and they were flying quite high.  Their flight was swift. Tern?
The second night, they were low enough to see their brown coloring and detect the white bar on their wings. That's no tern!  Then, there was the frog like sound, but it was coming from the sky! Wow, could it be that we're finally seeing a bird from the Goatsucker family?
Yes..... It's a Nighthawk!  Noting the white wing bar was a great field mark.  All these years of hearing and never seeing Whip-poor-wills and Chuck-will's-widows (say that 5 times fast) we, at last, got to see a relative!  I was thrilled :)
I've only seen one Nighthawk, one time, since we've been back. They are one of the first to migrate.  I'm wondering if these birds were taking a mini break from their voyage south to bulk up on Bluffton's insects.   I say, "Thank you for spending time with us, for your entertaining dog fight flight, and for keeping our insect population in check! Safe travels!"
Posted by Pam Johnson Brickell at 12:59 PM