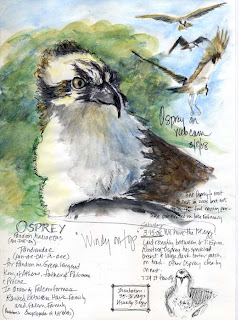 Let's face it, the majority of mankind lives in suburbia and the chances of observing intimate wildlife dramas are few and far between. But ahhhhhhh, there is a solution.... Webcam's! You can watch to your hearts delight and cause no stress to the animal you're viewing.
On March 8th, I checked out Palmetto Electric's webcam of an Osprey nest that is located on one of their towers (click title to connect to webcam). I became a webcam junkie! The images were incredible. I designated a part of my current nature journal to cover the nesting and hopefully birth of this Osprey family. I was chewing up pages with my observations. I became real good at capturing 5 second poses. Luckily, the Palmetto Electric webcam operator would capture some still images of the birds and post these to the website. How wonderful to have all this at the tips of my fingers! Who says you have to be outside to make journal entries! :)
I visited these magnificent birds first thing in the a.m and many times during the day until nightfall. I became worried about getting my work done as the Ospreys kept calling me to check them out. Kind of like the dark chocolate candy in the refrigerator......
It was fascinating to to watch the interplay between the male and female. Then, there were the times when the roosting parent would get in a defensive pose.... Eagle flying over? As I look back on my notes, I find many question marks. Bird behavior befuddleties (is that a word?)
This year's nesting story has a sad ending as, after the 3rd egg was laid, the birds stopped roosting on the nest. They covered the eggs with lots of nesting material and visited the often but, would not commit to laying on the eggs. ??????? Bbb!
Hopefully, next year will make for a happier ending. I better make sure to have all my new paintings, for spring shows, done early as I know I'll get nothing done should 2009's brood hatch!!
Posted by Pam Johnson Brickell at 2:50 PM No comments: