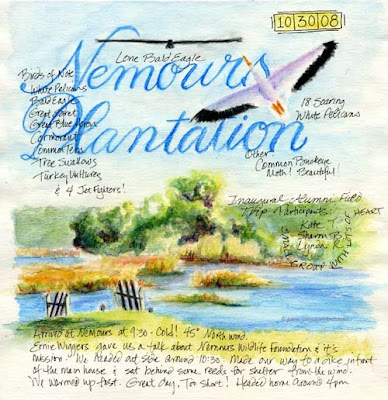 I held my inaugural nature journaling field trip, for past workshop participants, at Nemours Plantation on October 30th. Nemours, a private plantation, is located in northern Beaufort County and extends for 8 miles along the southern bank of the Combahee River. It lies within the ACE Basin - a low country treasure that includes approxamately 170,000 protected acres within the Ashepoo, Combahee, and Edisto River Basins. 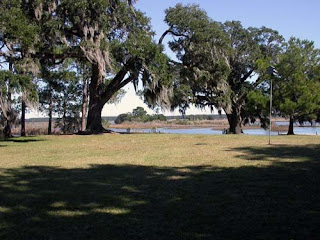 Most of the wetlands associated with the Combahee River were diked in the 1700's and converted to fields for growing rice. Rice farming in SC disappeared by the 1920's but the dikes and water control structures (rice trunks) have been maintained and are used today to create habitats for wetland dependent wildlife. 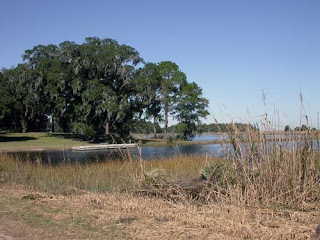 Mr. duPont had the vision to protect this plantation forever and upon his passing in 1995 the Nemours Wildlife Foundation was established. In 1999, the Foundation hired Dr. Ernie Wiggers as its first Executive Director. In Dr. Wiggers words, "Our vision for the Foundation is to continue the legacy of Eugene duPont, III and his family through excellence in land stewardship, education, and science."

Back in March, after the Master Naturalist field trip to Nemours, I proposed my nature journaling field trip idea to Ernie. One of my ongoing goals is to keep workshop participants actively journaling and what better way to accomplish this than to plan special educational trips? Thank you, Ernie, for helping me achieve this goal!

I sent out 26 invitations and received a lot of interest from workshop alumni. However, between some folks still being out of town for the summer and some cancelations due to unexpected circumstances, the RSVP list dwindled down to 3. We were a small group but had lots of heart! Ernie met us inside the Nemours' educational building and while the crisp fall air warmed, he shared information about the plantation and the Foundation's mission and goals. Ernie was very generous with his time and luckily by the time we headed out to discover nature's wonders, the only thing we needed to do was find shelter from the north wind. 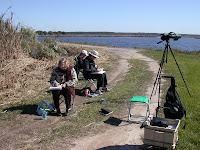 We found some reeds along the rice impoundment dike in front of the main house. We settled in and as we became quiet, nature came alive around us.

Sharon found a Common Buckeye butterfly. It was very cooperative about being photographed! My guide book states they love to alight on bare soil or gravel (that's where it was) but, that it's extremely wary and difficult to approach. They do not withstand freezing temperatures and will migrate to the gulf coast, so perhaps the 40 degree morning temps made it sluggish.

While Sharon, Lynda and Kate sketched, I handed out guide sheets on waterbirds and discussed how to ID birds by their silhouette and field marks versus color. We didn't see any migrating birds but, we had a good look at a Bald Eagle, 18 soaring White Pelicans, Great Egrets, a Snowy Egret, a couple of Great Blue Herons, a Cormorant, a few Common Terns, Turkey Vultures and 4 Jet Fighters from the Marine base! 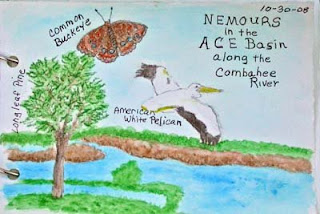 The marsh grass was begining to turn golden. We were discussing a few plants that were flowering and I had the perfect opportunity to explain whay scientific names are so important to record in journals. Case in point 'Sea Myrtle.' Lynda said she knew this shrub by the name Groundsel-tree. Also correct! Another common name for it is Consumption Weed. By including the scientific name in your notes there will be no question as to the plants identity. 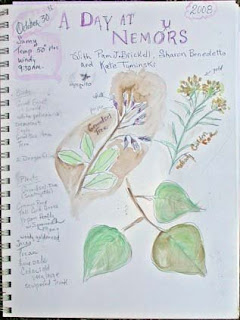 Scientific names of plants are a universally accepted, standardized system governed by the International Code of Botanical Nomenclature (ICBN). According to my Wildflowers of SC guide book by R.D. Porcher and D.A. Rayner, the scientific name always consists of two Latin or latinized words: a genus or generic name and a specific epithet for the species. The specific epithet is followed by the name of the person(s) who first described the plant. This subject, alone, could fill many blog posts so I'll end it here :) 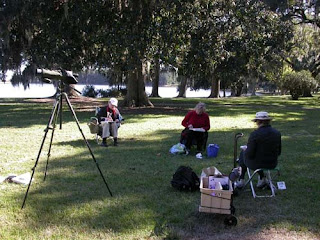 After lunch we moved back up to the lawn. The tide must have turned as the north wind picked up again. We kept having to move so we'd stay in the sunshine! 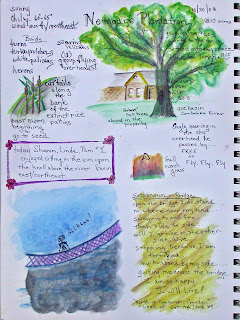 Kate added memory drawings and a poem, on the bottom of her journal page, from her recent trip to Washington state. That's what I love about journaling. You can do anything you want :) 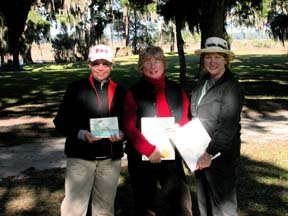 We had a great time. Renewed friendships and as Lynda so nicely put it - we were with kindred spirits in beautiful surroundings. Thank you, Lynda, Kate and Sharon for making this inaugural workshop great!
Posted by Pam Johnson Brickell at 12:17 PM No comments: