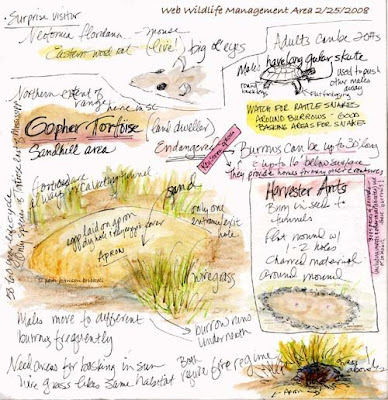 A year ago, at this time, I began Clemson University's Master Naturalist Program at the Low Country Institute in Beaufort County.

One of our first field trips was to Webb Wildlife Management Area. I will discuss the morning session of our field trip in another post. In the afternoon, we visited a sand hill area that is the northern extent of the Gopher Tortoise, G. polyphemus, range in South Carolina.

As we walked closer to an area that contained a Gopher Tortoise burrow we were given a warning to watch for rattlesnakes, as they like to bask in the sun around borrows. We saw Harvester Ant mounds. Very interesting, but mostly our eyes were watching for snakes :)

Finally, we made it to the tortoise burrow. Tony Mills brought fiber optic equipment to insert into the burrow to see if it was occupied. After many tries, nothing was discovered. The tunnels can be 30' long and up to 16' below the surface! We didn't have quite that much cable.

There can be as many as 300 species of animals (including insects and other invertebrates) that use or inhabit the Gopher Tortoise's 'digs!' This makes the endangered GT a keystone species. The sand hill environment contained lots of wire grass and Turkey Oaks. These areas, like the Long Leaf Pine forests require fire regimes to stay healthy. The Turkey Oaks, Quercus laevis, are well adapted to drought stress and fire.

One of the things I enjoyed the most, while studying to be a Master Naturalist, was learning about the interplay of different species in their ecosystems. Everything is so intertwined and dependent upon each other. Image what would happen should the GT become extinct! What would happen to the 300 different species that seek shelter in the burrows?
Posted by Pam Johnson Brickell at 8:57 AM