Over the last month, Rob and I have been noticing a pair of Kildeer hanging out in the same spot close the curb on a road we frequent. Could it be they are nesting? It would be just like Kildeer to nest in this precarious spot - traffic all around. Mind you, the road is in our neighborhood and the speed limit is 25 but still........

Well, last night we hit pay dirt and almost hatchlings! Two little ones were in the street!!!!! Mom and Dad were on the grass calling to their babies. Luckily we were poking along in the golf cart. I asked Rob to turn the cart around and go back and we're glad we did as we were able to urge the little ones out of the street just before a car came along.

We saw them again tonight, sorry for the blurry picture - I had dogs on my lap. There was one adult and one hatchling next to the road. We heard the other adult but couldn't see it.

Back in June of 2005, we had another close encounter with a Kildeer family. We were living in a small neighborhood on the shores of a lake in western NY. One afternoon, while walking the dogs, I was startled to see a Kildeer laying in the gravel driveway of my neighbors boat garage. Most of our neighbors were summer residents. This neighbor fell into that category and were due to arrive mid-June. The inactivity on their property must have been inviting to the Kildeer. 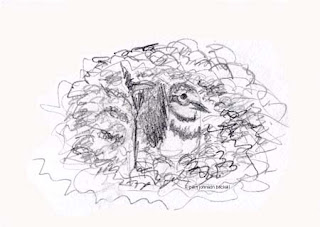 The nest was about 15 feet in front of the garage and if you looked at it head on, it was positioned between the garage doors.

My nature journal notes were made on June 17th. I had estimated chicks to hatch in 1 1/2 to 2 weeks but was concerned that the nest may be abandoned as our neighbors were there to take the boat out of the garage. I was able to warn them about the nest. The kildeer couple let Charlie know who owned the driveway. One bird tried to lead him away from the nest with the broken wing ploy but, when Charlie kept on toward the garage door, the nesting bird went after him. Somehow they all must have made peace as the next day the boat came out and when I went to check on the nest, a kildeer was roosting.

Not many days after that chaos we had torrential rains. The nesting vigil kept up. These were strong hearted birds! It's a good thing as Kildeer populations have shown significant decline linked to agricultural and other land use changes. I was hoping I could see the little ones when they hatched. Kildeer hatchlings are precocial - which means they have heavy down and are soon mobile, often requiring little direct parental care. 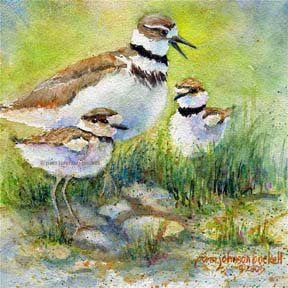 I so wanted to observe and sketch the little ones.

The first hatchling arrived on July 4th and I saw the second on the 5th. On the 6th I saw a total of 4 puff balls with legs almost as long as the adults. Tooooo cute! What a wonder nature is. The kildeer family moved on quickly. Summer 'lakers' were there in force.

I thanked Mother Nature for healthy babies and great timing as the following weekend the gravel driveway was to be used by caterers for the neighbors lawn party.

I'm still looking for a good home for this little 6" x 6" watercolor on clayboard. I can't believe no one's grabbed it up yet. But, I will surely miss it when it does sell. I've told the above story to many a soul who's walked into my show booth :)

I have recently found this photo journal entitled To Raise a Kildeer. It's worth a look!
Posted by Pam Johnson Brickell at 8:03 PM