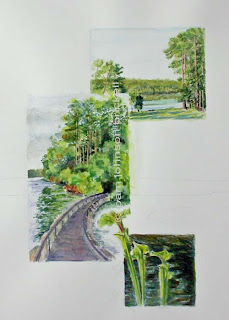 The insets are finished! Now I have the challenge of protecting them and completing the 16 x 20 painting. I must admit, it's been a while since I worked this large in watercolors - not to mention Arches HP paper. If you hear a scream, it just me :)

I usually use 'extra tack' frisket film by Grafix for masking large areas. However, the last time I used it, there was some leakage due to poor contact on cold press paper. I'm sure I'd get good adhesion on the hot press paper, but.... once burned, twice shy or something like that :)

I did see a great masking tip on Sarah Wimperis' blog Muddy Red Shoes. She cuts her masking film a tad smaller than the area to be covered and then uses liquid masking fluid to both finish the edge and totally adhere the edge of the frisket. 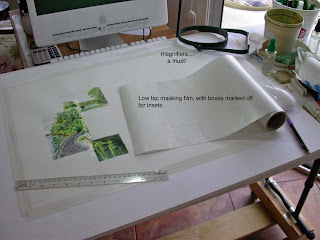 I didn't see the point of using the expensive extra tack frisket for this so used a role of low tack. 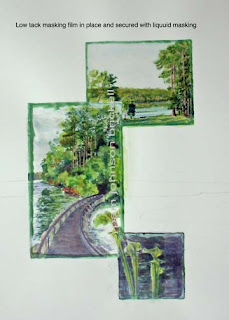