The Marsh Tacky Run and Cup 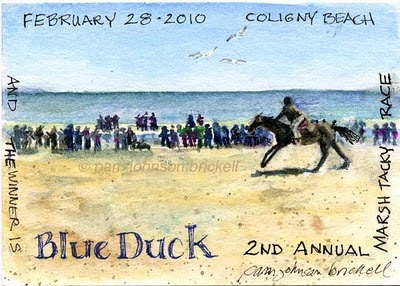 Last Sunday we had perfect weather for the 2nd annual Marsh Tacky Race. This is such a great promotional event to try and save the South Carolina Marsh Tacky breed.

They are a rare, small, colonial Spanish horse breed unique to South Carolina. My favorite fact is that these sure footed, agile horses, that were left by the Spanish explorers 500 years ago and survived in the low country's swampy terrain, were the mounts used by General Francis Marion, aka The Swamp Fox, in victorious battles against the British troops who rode larger European horses.
The 'Swamp Fox' was one of my favorite Disney programs when growing up. I had such a crush on the actor that played Francis Marion.

To see these proud little horses in the flesh was such a treat. They range from 13 to 15 hands tall. The way the newspapers spoke about these small horses, I expected to see them at 12 hands high tops (15 hands isn't that small). My brother's Palomino, we had growing up on the farm, was 16 hands. That was a good-sized horse. The Marsh Tacky horses we saw at the race didn't look that much smaller.

I began the above painting (ATC size 2.5" x 3.5") at the end of the preliminary heats. The announcer said that the horses had to rest before the final race. I was able to paint the sky and beach when all of a sudden the horses were racing!!! What kind of rest was that?? I finished up the painting in my studio.

I'm disappointed with the scan. I've so much more detail in the darks. Oh well, not much time these days for fussing.

Here are some short videos of the activities. Finally a beautiful spring day. It was a tease as Monday once again turned cold and windy.
This is Blue Duck winning one of the heats.
Here is Molly winning the mare heat. I thought she would win the final race and almost did!
This is another heat with Blue Duck as the winner. His owner/rider is William Green. I wish I could say that this was the final race, but I couldn't get to my camera fast enough. Blue Duck, the final winner, is one competitive horse :) Only Molly challenged him. (way to go girl :) )
Posted by Pam Johnson Brickell at 7:49 PM