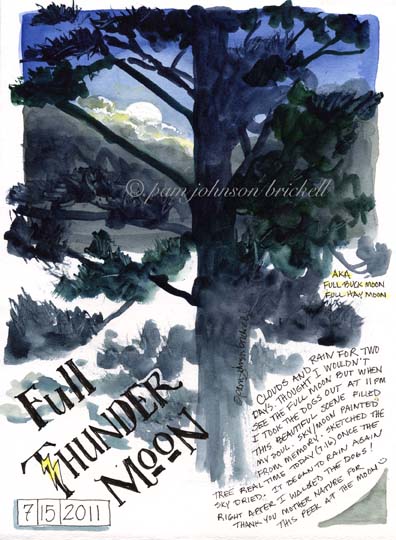 I'm ever so pleased to report the clouds that covered our piece of the sky for the last two days parted just in time for me to get a quick glimpse of the full moon!

I'd written July's full moon off.... while daylight lingered, there were far too many clouds... not to mention a shower or two.

I was stunned when I took the dogs out for their last pee trip at 11 pm to see this gorgeous sight! I rush back inside for the camera, but to no avail. The clouds smothered the moon and rain soon followed.

The image was burned in my memory and it had to come out :) Today, I painted the sky, let it dry and then sat on the front porch and painted the tree.  I'm such a pick about having my full moon sketches being executed en plein air.... I love the drama that I just don't feel in the studio. I did get the brightness of the moon better in the studio, though :) For the highlights on the clouds I used a uniball Sigmo white pen. Even put some on the moon. Ha ha!

July's full moon is also known as the Full Buck Moon as in the northeast (I like using the NE Native American's full moon names) the new antlers of buck deer push out of their foreheads. It's also know as the Full Hay Moon. We saw a lot of dino balls in the fields on our drive back from NY this week (that's what I call the large hay rolls they make now instead of bales.... The first time I ever saw hay roles I imagined dinosaurs visiting hay fields and leaving their calling card.....  kind of like bunny pills) That was probably TMI :)
Posted by Pam Johnson Brickell at 6:07 PM