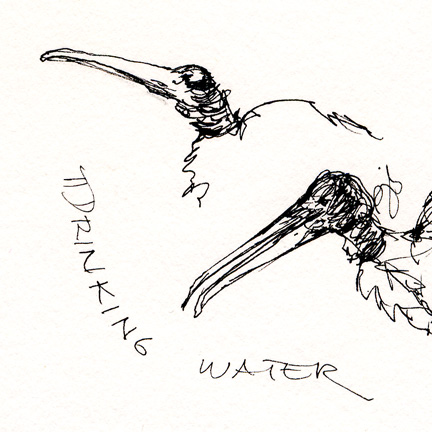 On May 14th, I spent about an hour at the rookery sketching while looking through my birding scope and a lot of time just observing the Wood Storks, Great Egrets and Anhinga.

I witnessed storks on the ground playing tug-a-war with a large stick. The winner flew off with it, landed in a large pine and then propped the stick so it balanced while he(?) preened!  It just doesn't get any better than this for me.  I could spend the whole day there being a fly on the wall, so to speak :) 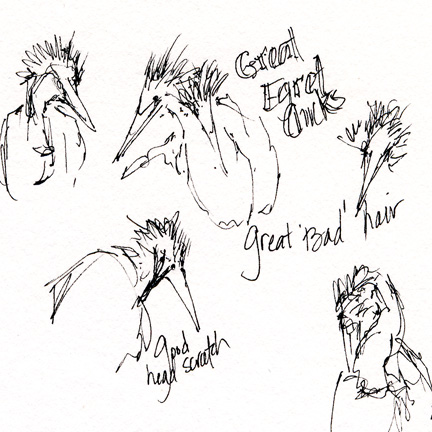 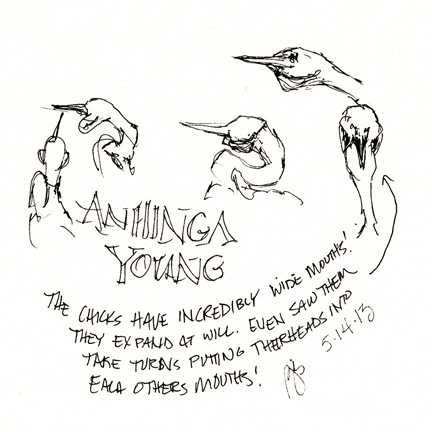 I''m practicing a new-to-me sketching technique.  I'm using my eyes as a camera and hoping the snapshot I take remains in my brain well enough so I am able to capture my subject on paper.  From these initial tries I think I will be building better memory skills, too.

Step one: look.  Step two: close your eyes and turn your head to face your sketchbook.  Step three: very important.... the first thing you look at is your blank paper.  Then you use your recall to sketch what you saw. Wowza, I can't remember anything!!!  Right now, my comfort zone is one eye looking through the scope and for the most part, sketching my subject using the blind contour technique.  But. practice I will. I have the burning desire to capture birds on the wing and this technique will get me there.

The best?  Saw my first ever Roseate Spoonbill! 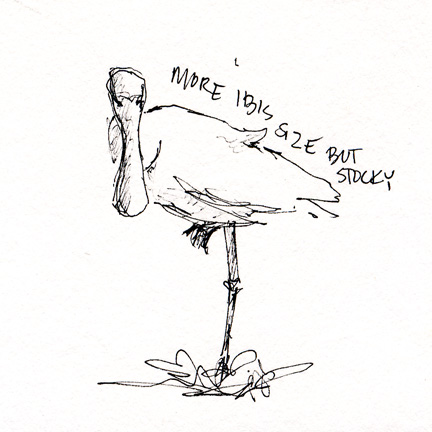 We have a token Roseate that hangs out with the storks.  It appeared on the ground while I was watching the tug-of-war game.  The RS is a lot smaller than I thought it would be.  This one had the slightest blush of pink on it's wings.  Every now and then a stork would run after it.  Definitely low in the pecking order of the rookery.

The SC Department of Natural Resources (DNR) studies the storks on a weekly basis.  Last week the volunteer that does these studies was able to read a leg band on one of the storks.  It turns out that the stork was banded on Harris Neck Wildlife Refuge..... are you ready?,,,,, 17 years ago!  Cool :)
Posted by Pam Johnson Brickell at 6:30 AM